Start a Wiki
Here we are guys, 26 months since the airing of the first episode, and the shithole gets that we call a fandom keeps getting wider than ever. And the more you lurk, the wider you realize it is; all spammed and ponified by the same jobless 20 year old neckbeards. Look at what we got now - half a million deviantart ponies, 4000 "brony" songs, 150 animated shorts, 20 brony radio stations, 3 conventions per month, two global bans on 4chan, yet not a single fuck given since day one. No wonder half the internet thinks we're cancer.

Ever stopped to ask yourself, "Wait a minute, how the hell did I get here? My god what has hapenned to me? We were nothing but a sanctioned clubhouse on /co/, back when love and tolerance was a widely recognized joke, back when there was no 'fan of the fandom,' back when we were in love with the animation rather than the ponies themselves." Come to think of it, the so-called "fandom" has been a series of "what the fuck" moments.

We weren't always a bunch of sexually suppressed repungent manchildren getting off to "best pony" with the mindset that we were above furfaggotry, which, may I add, believe we are cancer as well. Yeah that's what happens when 1 of ever 3 people at Anthrocon come in with a pony t-shirt.

Cast your eyes on that young MLPG right there. Much more sane and civil than anything here, but surely you can smell the denial through the screen.

Fast forward 14 days, past that drama concerning that stubborn Amid guy, we don't need that. Paid critics were never entitled to get anything right. It was this thread that spoiled us. 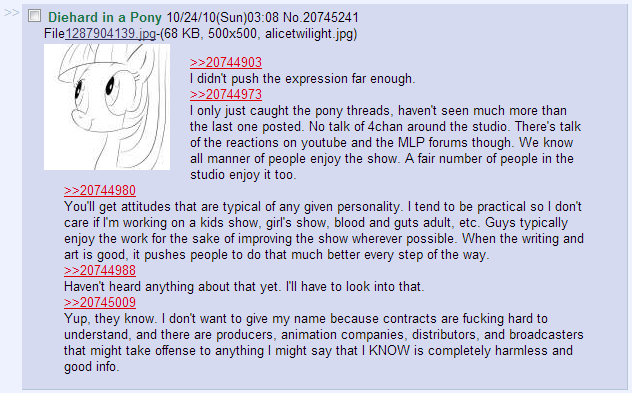 Two weeks is a little early to get involved with a few enthusiasts, right? One thing's for sure, it was a perfect jumpstart to the voyage of spaghetti we have begun.

For more of the first pony threads, go to the link below, as archive.no-ip.org was shut down.

Moments past midnight, a namefag, "Dr. Foreigner", pointed out an animation error and coined the name of the most well known fan character in the series. Fan art was "TO BE MADE IMMEDIATELY!" according to the enthusiasm of one anon.

Never did get to thank that guy; he just vanished. I wonder how it feels knowing you're the person who gave birth to our neckbeards' most prized possession? And to think, none of that fan art would have existed...

The next night, October 25, circa 10pm, an anon marked the first use of the word "brony." The word was then spammed throughout the MLPG's by a tripfag named Sparkle Fizzlelove. 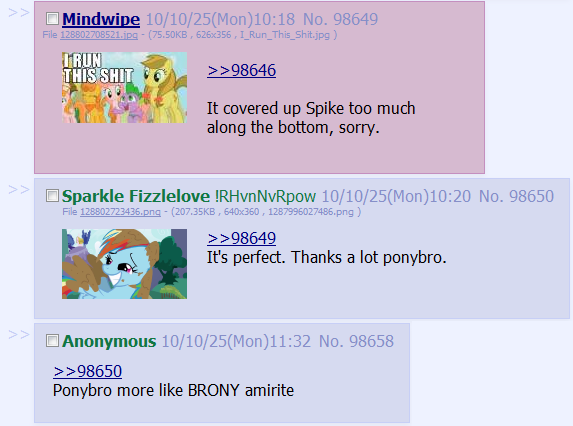 Congratulations, anon, you have no idea what you just got yourself into. If this wasn't 4chan, you would have been doxxed of every detail of your life by now.

Lauren Faust responds to the fandom? Why?

But you know what makes it better? When the creator of the show hosts a Q&A on /co/! Yeah that dissipates it all. On December 9th, Lauren Faust herself reminds her to-be-lifetime-fans that their spam on /co/ is SO AWESUMMMM!!!

Six days later, some tripfag under the alias Archive!noTe.poNY, helps centralize the threads using his system he calls "the lifeboat," where his server redirects you to the current MLPG thread to avoid spam. Much props to that guy. But its already too late. These "bronies" have already spilled overtop your floodgates and have infected /b/, /v/, and /a/. 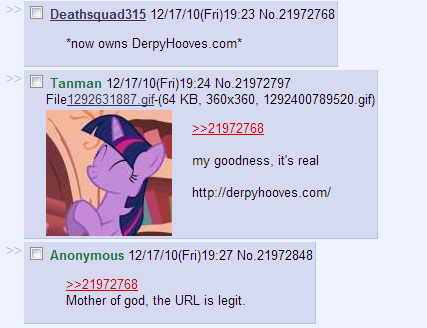 See this URL? This site actually appeared on /co/ on December 17th before Eqd was established. Eventually the URL was revised to derpyhoovesnews.com.

Unlike its current status, back then it was a shrine site for Derpy. As far as we know, it was the first independent pony site to exist. But unlike Sethisto, their admin, "Derpysquad" actually had a life at the time, and no one really cared about the blog anyhow.

Most of their reporting occurs a few days past their deadlines, jumping over major headlines and what not.

On January 20th Seth finally got bored of spamming /co/ with Trixie roleplay , and after a decent humping session he had with his blue pillow with legs, he decided to use his spare time for something useful. It was that point that Seth realized that ponies are obviously more important than his college grade, and chuckled at how he could have forgotten such a thing. Eventually his works would be picked as the central hub of ponyfags.

On January 24, a gore-loving name/tripfag named "Sergeant Sprinkles," began posting his biggest gore fic titled, "Sweetmeats ." The funny thing is, he was actually issued a 2 day ban before finishing. On January 26, he was back with the same fanfic under the name, "Cupcakes." It was glorious.

The sensifags on /co/, surprisingly couldn't even handle the gore.

How did that...come out of...that? That's a question I can't even answer.

Then we have this guy. Encouraged by the massive number of /b/ros and /co/lts manchildren who were infuriated by the lack of hugboxing on 4chan , some /b/tard decided to coverlove them like no other, and established their new home, Ponychan. Then, it was raided by /b/ later that night. Then the next night, /co/ raided it. That delusional hugbox known as Ponychan was established by refugee /b/tards. 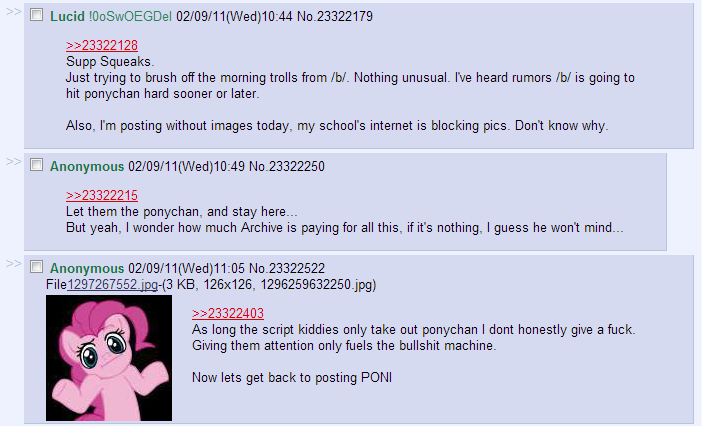 Trying not to get off-track here, but /co/ never exactly approved of Ponychan. That's why the MLPG's continued to grow.

And then they raided it.

The cancer that is killing /b/ 4chan

By now, ponies are by far the fastest general on /co/, posting over 4000 times per day in MLPG's in 12 threads per day. Many /co/mrades had already given up on participating here, as the mods were forced to crack down and delete any excess threads.

Meanwhile, /b/ was having worse trouble. There was no organization there, so there would be multiple threads per day, and the mods couldn't keep up. When the front page is bombarded with ponies 24/7, it is not "random" anymore. It was shockingly, cancer. ZOMG!! DONT YOU DARE SAY THAT!!!!

(see: pony bans on 4chan) One day, a mod had the most apeshit idea that would clearly fix this issue for good. Instead of contacting moot to suggest the opening of a pony board and call it a day, he thought there would be no future consequences by issuing a global pony ban without prior warning. Well done, mods. Now the toxins are there, permanently.

The next day, the global ban was at least lifted on /co/, under strict moderation and cracked-down rules. A moderator over at /b/, a few days later, stumbled upon Ponychan and was shocked to find a board designed for ban evasion. He immediately posted it on /b/, and the site was down in a matter of minutes. Convinced that the pony war was now over, he lifted the global ban altogether.

Contrary to popular belief, this ban did not do anything to save /b/ other than convince the bronies of being "victimized". In fact, if it weren't for this ban, the shitposters on /b/ probably wouldn't be there, as they're doing this for the sole purpose of shitposting.

Throughout the month of May, the "fandom" had yet to cease its imperialistic hivemind. It was all about WORLD DOMINATION!!!! and PONIFY EVERYTHING!!! The fandom split in two groups - the people who stayed on the MLPGs on 4chan, and the fandom who genuinely thought "love and tolerance" was a religion we followed. As the cancer grew, and the internet began to shrink.

Boots on hooves, bikinis on top,

After Hasbro's acknowledgement of the fandom, the involvement of the fandom grew to unneccesary proportions. Perhaps they were getting too much attention, who knows. Over the summer of 2011, Equestria Daily shifted from being an MLPG blog to a general fandom blog, and Ponychan was removed from the linkboard. WoodenToaster, OdysseyEurobeat, and DJ Alex S began a movement of "Brony Musicians" which was abused as an outlet to gain more attention. Meanwhile, a group of game developers worked together on a "ponified" Street Fighter knockoff . They say that once you join the fandom, you naturally never leave.

After a whole summer of ponyfaggotry infecting boards on 4chan, the mods were finally fed up with it. On October 22, Moot [sic] posted a sticky on /b/ asking the bronies to kindly leave. Most of them refused to do so, as they were mostly intentional shitposters now. After countless bans trying to cure the cancer on /b/, the mods eventually realized they, sadly, were fighting a losing battle, and gave up.

Over the next few months, moot was feeling convinced that the bronies were never going to leave 4chan. On February 17, 2012, we were finally given a place for actual discussion of the show, or a place to contain the cancer - /mlp/. Either way works. As for the remaining shitposters on /b/, we have come to the conclusion that they are too suspiciously organized to be any of us.

You know, looking back at it, it all makes sense.

Retrieved from "https://reddonychandaily.fandom.com/wiki/History_of_%22Bronies%22?oldid=4216"
Community content is available under CC-BY-SA unless otherwise noted.