Sometime around 9:00 PM EST, 3 hours before the next day, the traffic maxed out. Those poor servers couldn't defend themselves from faggotry of that magnitude, stirring butthurt throughout the community, yet failed to deliver lulz to its rival boards, /v/, /co/, and /b/, as they were taken down with their self-induced shitstorm. Four hours later, the faggot levels restabilized and returned the servers back online - an hour past midnight. As /mlp/'s plans failed, the flood came to an end. 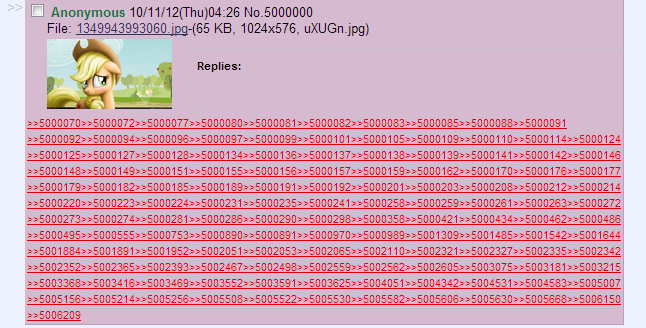 What you'd think no one really would give a shit about turned the tables on those dedicated posters. The AiE writers stopped writing, the Tulpaists stopped tulpa-ing, fucking Mike Tyson stopped biting people's ears off, everyone in awe at the Applefags, as if it were the reinvention of sliced bread or something. For once, Applefags reigned in the nation of basement dwellers. However, some argue that OP was just trying to be different, and actually wasn't a true Applefag. These speculations are probably right.

Retrieved from "https://reddonychandaily.fandom.com/wiki/5_Million_GET?oldid=4133"
Community content is available under CC-BY-SA unless otherwise noted.